skip to main | skip to sidebar

Celebration of Nations
set for Sept. 24 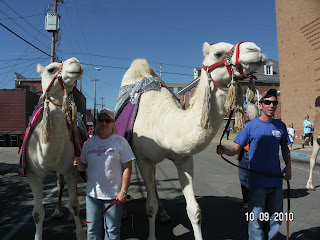 If you haven’t already put it on your calendar, the 2nd Annual Celebration of Nations will be held on Saturday, Sept. 24 (11 a.m. – 5 p.m.) in downtown Rolla.
Celebration of Nations was created to promote awareness, understanding and the celebration of the vibrant cultural diversity that makes Rolla unique to the Ozarks. Area residents and Missouri S&T students, with the help of great sponsors and full support of the City of Rolla, got together for the first Celebration of Nations on Oct. 9, 2010. This event was a huge success and this year’s “Celebration” promises to be even bigger and better.
With more than 800 international students from 80 countries attending Missouri S&T, Rolla’s international make-up has never been as evident as during this event that celebrates the diverse and rich cultures of our community’s international students, faculty and residents.
Celebration of Nations is as festive as it is unique, and if you didn’t get a chance to attend the event last year, you won’t want to miss it. It all starts with the Parade of Nations (over 80 countries represented) at the Havener Center on the Missouri University of Science and Technology campus at 11 a.m. The parade winds through downtown Rolla, and concludes on 9th Street at the downtown festival lot and bandshell where parade goers will be recognized much like the opening ceremonies of the Olympics. Downtown will be filled with floats, bands, camels, horses, and more flags from more countries you may ever see in once place. If you like festivals, culture, diversity, travel, great food, entertainment, education, and fun, you are sure to enjoy Celebration of Nations.
After the parade, a Celebration of Nations festival will be held in the downtown festival park that will include a variety authentic crafts and international foods from around the world, calligraphy, face painting, children’s activities, a petting zoo, inflatable games, horse rides, a mock Eifel tower, a genuine tent from Saudi Arabia, complete with sand, camels, dates, and tea served by Missouri S&T students. Children will be given passports that they can have stamped by international students who are hosting booths that reflect the cultures and customs of their native countries.  Children will also have an opportunity to put their hand prints on a large 6-foot paper Mache ‘earth globe’ to reflect the Celebration of Nations theme of “One Campus. One Community. One World.”
International Idol, which includes a wide spectrum of performances representing an international flair much like the American Idol completion seen on TV, is also a highlight of the festival. This event alone is worth attending the Celebration of Nations as it attracts some of the best talent and entertainment in the Ozarks.
If you are interested in joining in the festivities by having a float in the parade, being a vendor/crafter at the festival or competing in the “International Idol” contest, please contact Stephane Menand in the Office of International Affairs at Missouri S&T at stephane@menand.mst.edu or visit www.nations.mst.edu.
Have a safe week. And a safe school year!
Mayor Jenks appoints
Sue Eudaly to
Rolla City Council 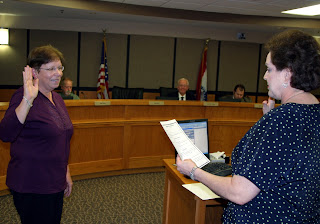 Rolla Mayor Bill Jenks, III appointed former Rolla City Councilwoman Sue Eudaly to fill the unexpired term of outgoing Council member Geoffrey Horning (Ward 3) at the Sept. 19 Rolla City Council meeting.
Eudaly, who teaches in the Rolla Public Schools, and is an active member of the community, was sworn in by City Clerk Carol Daniels shortly after her appointment was unanimously approved by the Rolla City Council. Eudaly previously served on the Rolla City Council for a total of eight years (1996-2000 and 2006-2010).
Former Council member Geoffrey Horning, who served on the City Council from April 2010 to September 2011, was recognized by Mayor Jenks and the Council for his service at the Sept. 6 Council meeting. Horning announced at a prior Council meeting that he plans to relocate to Saudi Arabia to teach EMS and Emergency Response classes at Al-Ghad College.
Gene Sally Parkway
dedication ceremony
set for Sept. 30
The public is invited to attend the “Gene Sally Parkway” dedication ceremony which will be held on Friday, Sept. 30 at 4 p.m. in the courtyard in front of Rolla City Hall, located at 901 N. Elm Street.
The Rolla City Council recently approved an ordinance to designate an overlay of the 10th Street Bridge in Rolla as the “Gene Sally Parkway”  in honor and memory of the former Missouri State Senator and State Representative Gene Sally who was a prominent Rolla real estate developer, and community leader largely responsible for the construction and funding of the 10th Street Bridge in Rolla.
In addition, Sally was largely responsible for much of the development that has occurred in the east area of Rolla, including the Forum Shopping Center, Forum Hills subdivision, and Rolla Technical Institute. In addition Mr. Sally was instrumental in the purchase of Rolla National Airport for $1, and was one of the purchasing partners of Oak Meadow Country Club. He was also an active supporter of Rolla youth sports.
After a brief ceremony with remarks from Mayor Bill Jenks, Gene Sally and other community leaders at the City Hall courtyard, a ribbon cutting ceremony will be held at the corner of 10th and Elm Streets. A reception will be held afterward on the 3rd floor of Rolla City Hall.
“Gene Sally had a tremendous impact on Rolla’s growth, development and prosperity while he was a stage legislator, real estate developer and community leader,” said  Rolla Mayor Bill Jenks, III. “Naming the 10th Street Bridge the Gene Sally Parkway is a very fitting legacy for an individual who contributed so much to our community.”
For more information, please call Rolla City Administration at 426-6948.
Volunteer efforts
make big impact
at Ber Juan Park 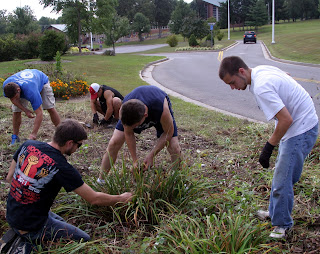 Thanks to the hard work and efforts of more than 45 volunteers consisting of  Sigma Phi Epsilon students at Missouri S&T, the staff at Mark Twain National Forest, members of the Master Gardeners, and First United Methodist Church in Rolla, significant landscaping and maintenance projects were completed during a highly productive and successful volunteer work day on Sept. 11 at Ber Juan Park in Rolla.
“The staff at The Centre and Parks and Recreation Department would like to express our appreciation and gratitude for all the dedicated volunteers who rolled up their sleeves to weed flower beds, trim bushes, remove dead vegetation, and help beautify many areas of Ber Juan Park during the volunteer clean up day,” said Scott Caron, the City of Rolla’s Recreation Director.
“If you consider the dollar value of what this group of volunteers contributed to The Centre and the Parks and Recreation Department, it would be in the hundreds,” said Caron. “We certainly welcome those contributions and the savings it meant to our departments at the City of Rolla.” 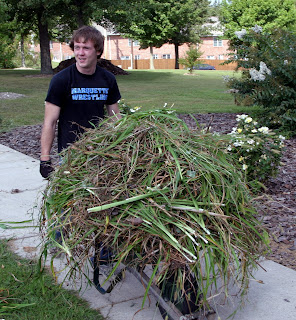 The volunteer clean-up was organized and coordinated in part by Kristy Rich, Parks Specialist; Stan Busch, Parks Superintendent; Dave Johnson, Park Foreman and Ron Daniels, Ballfield Specialist.
The flower beds, landscaping and walk way that is part of a nature area that was created by the Master Gardeners in Ber Juan Park was where the bulk of the volunteer work was completed. But the expansive sidewalks and landscaped areas in front of The Centre were attended to as well. In addition, members of First United Methodist Church displayed their volunteer talents as they gave a fresh coat of paint to the concession stand building located in the Ber Juan Sportsplex located on 18th Street.
Considered one of the jewels of Rolla, Ber Juan Park is a Mecca for recreational and health enthusiasts. In addition to The Centre, Rolla’s 63,000-square-foot health and recreation complex, it includes SplashZone, Rolla’s outdoor water park, the Ber Juan Tennis Complex, Ber Juan Sportsplex, Skate Park, a walking/biking trail, a 9-hole disc golf course, Ber Juan Lake, playground area, a pavilion, picnic tables, and huge open meadows and grass areas which make the perfect place for a picnic, a stroll, or nature walk.
Retired Enlisted Association
donates $2,000 to
Veterans Memorial Park,
Camp Brim Shire 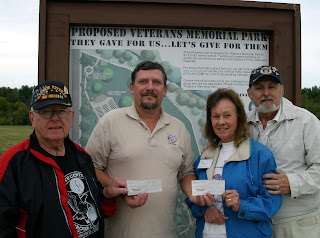